The sonification of user data from the Functional Re-adaptive Exercise Device.

Get this on GitHub

The Functional Readaptive Exercise Device (FRED) is an exercise machine for physiotherapautic use, with the specific goal of recruiting of the key spinal and abdominal muscles lumbar multifidus (LM) and transversus abdominis (TrA) which are implicated in lower back pain. FRED is a modified cross-trainer offering minimal resistance which results in an unstable base of support for the user: when the front foot reaches the forward-most position in its elliptical path gravity then pulls it downward requiring a compensatory balancing force to be applied by the rear foot to control the descent. Adopting an upright posture, the aim is to operate FRED in a smooth, controlled manner with the minimum variation in speed as possible. 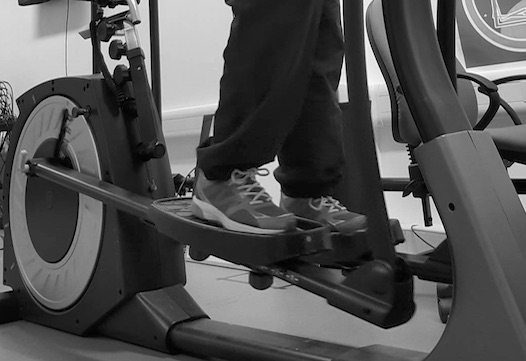 The device has two main sensors which are used to measure user performance: one to detect each time the wheel completes a rotation (called ‘top wheel’) and another to detect when the wheel moves 1/1000th of its circumference (the ‘tick sensor’). With these, the movement speed and the wheel’s exact position can be determined very precisely. The pulse stream from the sensors is sampled at 4 kHz into LabChart The data is converted to frequency values (i.e., revolutions per second) for ease of display for the user (a patient). The resultant data stream is then smoothed using a triangular Bartlett filter. The feedback given to the user is the LabChart output of the tick sensor smoothed with a Bartlett window to remove the steps in the data. 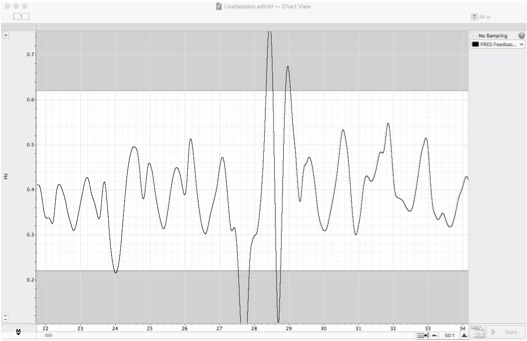 The display shows the optimal performance zone (the white area) which, for the FRED configuration used here, is a speed of 0.4 Hz \(\pm\) 0.2 Hz. The user is instructed to try to keep the plot line inside the white area. Previous work has determined that maintaining a speed of 0.2 Hz \(\leqslant\) f \(\leqslant\) $0.6 Hz leads to recruitment of the LM and TrA muscles thus producing therapeutic benefit, with optimal benefit occurring at f = 0.4 Hz.

The user can see how they are doing at a granular level, as the display updates at 20 Hz (every 50 ms). For non-expert users, the plot line varies a lot as each step is uneven due to the unconventional movement style required for smooth operation of FRED — users must shift weight to the rear heel to balance out the gravity-assisted forward step. If a user were able to operate FRED perfectly there would be speed variation and the plot would show a flat line at 0.4 Hz. Therefore, a curve such as shown in the figure is generated.

Discussions were held with physiotherapists from Northumbria University’s Aerospace Medicine and Rehabilitation Laboratory in which FRED is being developed. They stated that they would like to consider alternatives to the LabChart feedback for two reasons. First, not every patient is able to use the graphical plot due to poor visual acuity or visual fatigue caused by the close attention that needs to be paid to the display. Secondly, in order to keep track of the patient’s performance the supervising therapist must always attend to the visual display. It was felt that auditory feedback would allow the therapist to monitor patient performance while simultaneously making notes or attending to other matters. Furthermore, the human auditory system’s ability to discriminate between multiple parallel audio signals raises the possibility of providing feedback to other performance variables in addition to the base speed.

The physiotherapists said that there are several performance events that are of interest during an exercise session based on the raw speed variable. First, if a patient exceeds 0.6 Hz at any time this indicates a loss of control as they are failing to control the downward descent of the front foot. If the speed goes below 0.2 Hz this may also indicates a loss of control as it could denote a cessation of movement (typically caused by a loss of proper balance with the rear foot placing too much pressure on the foot plate). If there is a single drop below 0.2 Hz followed by a quick recovery, this is treated as a good recovery of control, but a number of drops below 0.2 Hz signals a problem in performance.

Finally, the target range of 0.2 Hz \(\leqslant\) f \(\leqslant\) 0.6 Hz means that a patient can display variability in average speed while still maintaining acceptable performance (the line stays in the white area). As a user becomes more experienced and is able to maintain greater control, the curve becomes flatter with less pronounced peaks and troughs. Therefore, for each patient, the physiotherapist additionally determines a maximum deviation from the individual mean as a target range based upon their assessment of the patient’s current ability and any physical characteristics that might impact upon how well they are able to use FRED. For example, a novice might expect to reach a standard target deviation of 0.15 Hz while someone who is able to keep within the range of, say, 0.35 Hz \(\leqslant\) f \(\leqslant\) 0.45 Hz would have a target deviation of 0.05 Hz. Once the therapist has determined a patient’s target deviation it is interesting to know at what points they fail to achieve it.

Therefore, it was agreed to sonify the FRED data by providing feedback on the user’s instantaneous walking speed, their variability, and each time they exceed 0.6 Hz or drop below 0.2 Hz.

We have built two different sonifications which are currently undergoing evaluation, but you can get a glimpse of what we were doing in this video.

This project is linked to the DSSon project.

Publications related to this project